What do pistons do?

One could say that pistons are the heart of an engine. Without pistons there is no compression, without compression there is no power. Pistons have the simple yet very important task of compressing the air – fuel mixture inside your engine so it can be ignited by your spark plug, in case of a gasoline engine, or ignited by the very act of compression, in case of a diesel engine. Pistons are then exposed to the great pressures and temperature of combustion which forces them down the bore and creates the power stroke. Finally they have the very important task of pushing out exhaust gasses out of your combustion chamber when they come back up the bore. As you can see pistons are a key component of an engine and they are absolutely crucial for its operation. 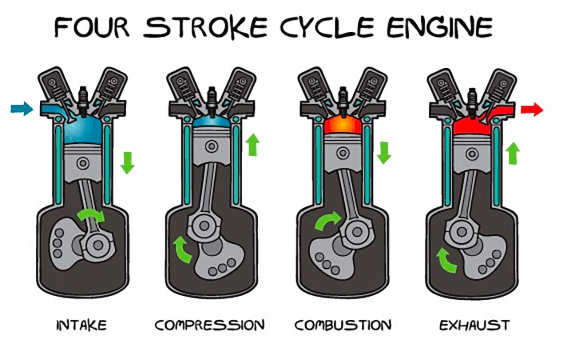 The different types of pistons

The manufacturing process of cast pistons starts with a molten alloy which is composed mostly of aluminum and a few other metals. Once the alloy is completely melted it is poured or injected into a mould. It then cures and solidifies. After this the mould retracts and the basic piston shape is complete. Cast pistons require very little machining before they can be installed into an engine block. Cast pistons are extremely widespread and can be found in many vehicles. They have the advantage of having low thermal expansion which means they allow tight piston to bore clearances which minimizes blowby, emissions and bore wear.

Hypereutectic pistons are made using a casting process and are ultimately less ductile and don't offer the same strength as forged pistons, but are a step up from typical cast pistons. The word hypereutectic denotes the silicon content of the piston. Any piston with more than 12.5% of silicon in it is going to be called hypereutectic. Silicon is important because it improves the wear characteristics of pistons, making them harder and thus lighter, but most importantly hypereutectic pistons expand even less than typical cast pistons which have on average 8-10% of silicon in them. This means that engine designers can specify extremely tight engine clearances when hypereutectic pistons are used, this in turn improves performance, efficiency, fuel economy and reduces emissions.

What to look out for when buying pistons?

There are a few questions you must ask yourself before deciding on a piston. The first question is the condition of the bores inside your cylinder, because this determines whether you will be buying standard size or oversize pistons. Oversize pistons have a slightly larger diameter than standard size pistons, usually between 0.5 – 2.00 mm larger. This oversize is used to account for the over-boring process that is done to the bores in your engine block to renew their condition and make them perfectly round once again. Once you have settled on size you have to decide whether you will be sticking with OEM piston specifications or whether you will upgrade your pistons. If you are rebuilding or repairing an engine that will retain OEM specs than the best option is to keep the same piston specs. But if you are modifying or tuning your engine you have the option to buy domed or dished pistons to increase or decrease your compression ratio, or you can upgrade from cast to forged pistons to give your engine internals more strength.

Why buy pistons from MaXpeedingRods

When is it time to replace pistons?

Any engine failure associated with pistons is always going to be a critical engine failure and will require an engine rebuild or overhaul. Because pistons sit deep inside your engine replacing them almost always requires complete engine removal and machining of various components to bring the engine back to proper working order.

The most common piston associated failures come from your piston rings and your bores and results in the engine loosing its ability to compress the air – fuel mixture and make power. The above symptoms usually occur late in the engine's life, after a lot of miles. At this stage the piston rings have been worn to the point where oil escapes past them into the combustion chamber causing the engine to burn a lot of oil and generate excessive smoke from the exhaust. The rings are also worn to the point where they can't compress the air – fuel mixture properly which leads to a loss of power and is often accompanied by a blue-ish smoke from your exhaust tailpipe. An engine like this has come to the end of its life and will require a total overhaul to restore its power. In most cases this means an overbore, with new rings and new oversized pistons.

Loss of compression in one cylinder

If your engine isn't making the power it used to you can test its compression. If only one cylinder fails to meet the minimum required compression and gives significantly different readings, a possible culprit is a broken ringland. Ringlands are the parts of pistons on which piston rings sit. They can break when exposed to various abnormal conditions such as over-revving, lack of maintenance, engine knock, etc. When a ringland breaks it will prevent the piston ring from properly sealing against the cylinder bore and will result in a loss of compression and power. When this condition gets serious the cylinder might not even fire and your engine will be running with one cylinder less. If the issue is ignored the cylinder might experience hydro-lock due to too much fuel washing down the oil from its bore leading to catastrophic engine failure. The only way to fix a broken ringland is to replace the pistons

If your engine breaks its belt or chain this will almost always result in a physical collision between your valves and your pistons. The results aren't pretty and require a complete engine overhaul. Your valves will be bent and embedded into your pistons requiring both new valves and new pistons. In some cases when a belt or chain breaks at high rpm the force of the collision can be so extreme that it breaks the piston apart causing metal particles to circulate through your engine resulting in damage to rod and main bearings. A broken belt or chain can also bend connecting rods and will require their replacement as well.